Every jazz fan should go the Village Vanguard at least once in their life; the little jazz club on 7th Ave South in Greenwich Village has occupied the same triangular cellar for 73 years, and its walls have absorbed some of the greatest jazz ever recorded. And, we must assume, unrecorded. 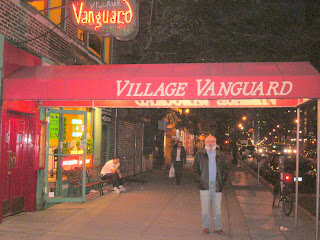 You see the famous awning first, and you can be forgiven for having your photo taken under it, in the place once occupied by John Coltrane, Pharoah Sanders, Alice Coltrane, Jimmy Garrison & Rashied Ali for the cover of Live at the Village Vanguard Again. You descend the narrow stairs, turn left at the bottom- hand over your cover & minimum, collect your drinks ticket and find a seat among the locals, out-of-towners and tourists from Europe & Japan who make up a typical Village Vanguard audience. On the wall are photos of some of the great jazz musicians who have played here. There's also a sousaphone attached to one wall- I've never found out why, nor located the famous 'Mingus light'. (Read the book for the story.)

It's likely that on your way to be seated you'll pass an elderly woman sitting at her special table to the left of the entrance; you will probably pay no attention to her but you should; she's

Lorraine Gordon, owner of the Vanguard since Max Gordon died in 1989; her book Alive at the Village Vanguard is a racy account of her life- her first husband was Alfred Lion, co-founder of Blue Note Records, and Max, founder of the Vanguard, was her second. (I read his book-Live at the Vanguard) years ago, but it meant less to me because then I only knew the club from record covers. I must find a copy.) Lorraine Gordon's book is a chatty 'as told to' autobiography & a fascinating read, though I would have appreciated more jazz gossip. It is interesting to learn that it was she in her role as publicist for Blue Note who persuaded Max to hire Monk for some gigs at the Vanguard- they were a financial disaster- but I would have like much more of the same. Still she comes across as a formidable independent woman, vehemently opposing the Vietnam war and travelling to Hanoi as part of a Women Strike for Peace delegation. While her husband was alive Lorraine had little to do with the running of the club- you get the impression that he did not not consider it woman's work- but realised when he died that she had to keep it going. She scolds his ghost at the very end of the book-'Don't call me girl Max, I'm a woman.' We owe her a debt of gratitude; it's a perfect setting to hear jazz (apart from the rumble of the 7th Ave subway). The acoustics are great, the piano's fine, the audience are encouraged to listen, not chat. The atmosphere is relaxed, the air a little musty- Lorraine denies vehemently that the place is dirty, and takes to task the 'New York jazz writer' who claimed otherwise. It was Francis Davis, who suggested 'time to change the kitty litter, Max.' As if we care.

In 1980 she met again the trumpeter Jabbo Smith, who she had first heard as a kid in 1938 at the Alcazar Club in New Jersey; he was playing at the Village Gate in a show called One Mo' Time. She later became his sponsor and manager. Which sent me back to my record shelves to dig out some of Jabbo's recordings from the 20s.

It used to be thought there were two Jabbo Smiths- the trumpeter who played on the OKeh 1927 Black & Tan Fantasy with Ellington surely could not be the same same man whose little Rhythm Aces band was promoted (unsuccessfully) in an attempt to cash in on the popularity of the Armstrong Hot 5s. The confusion is understandable- the solo on the Ellington side is muted (of course) and rather delicate; the Rhythm Aces recordings show his flashing mercurial side, fast, legato, virtuoso trumpet that seems to contains a pre-echo of Roy Eldridge (who admitted that Jabbo cut him on at least one occasion.) Listen to his opening cadenza on Jazz Battle- beautifully fluid playing. His slow playing lacked the nobility of Armstrong and the reckless melodic ingenuity of Henry Allen, but the 19 Rhythm Aces sides from 1929 are wonderful, exciting, risk-taking music that deserves to be better-known. The records sold badly, and Brunswick quickly dropped Jabbo. He'd retired from music completely by the end of the '30s, but after his success in One Mo' Time he toured and played festivals until a few years before his death in 1991, encouraged and assisted by his new manager.

So that's 2 reasons to be grateful to Lorraine Gordon.
Posted by Jazzhouse at 14:34 1 comment: