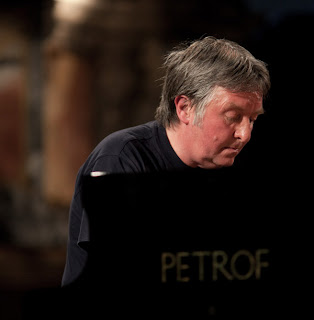 One great pianist we had failed to book for the Leicester Jazz House solo season at Embrace Arts was Howard Riley. In fact scanning the pages of the jazz press we could find no sign of any recent gigs by Howard at all. Was he still playing? There was one easy way to find out, and a quick search in the excellent Jazz Services directory gave us his phone number. We spoke, agreed a date and a fee, and started (with some excitement- he's been a musical hero of mine for a long time) to publicise the season.

Then the problems started; Howard was unwell and perhaps could not make the gig. Or maybe he would do one set and fill the rest of the time with a Q&A session. As the date approached even my normally optimistic spirit became a little anxious. We assured him that he would be among friends, with a sympathetic and attentive audience at what is a small arts centre with an excellent Bosendorffer. When I picked him up from the station the day before the gig it was an enormous relief when he told me: The gig's on- two sets!

We had a meal in a sombre mood- Gordon Beck's death had recently been announced, and Howard talked about the circumstances of his old sparring partner Jaki Byard's tragic end. We were not to know, of course, that Michael Garrick was to die suddenly and unexpectedly the day of the gig. Michael had charmed us with a duo gig a short while before, so the news was a great shock

The concert was a triumph. Howard played mostly standards and Monk tunes; the lightning virtuosity and extravagant technique of his 70's solo playing replaced by what Duncan Heining in his review of Howard's Monk/Ellington cd called 'careful, thoughtful and respectful' interpretations; no lack of technical expertise, but coming at the listener obliquely rather than full on. Several numbers began with improvisation, the theme emerging only at the end. Lots of knowing smiles from audience members at the point of recognition.

It was not the sell-out it deserved to be but the respectably-sized and enthusiastic audience included one guy who'd driven 80+ miles to attend. And I'm happy to say this is one gig that's not 'Gone...in the air.'  Howard asked us to arrange to have the concert recorded, just for his own use in reviewing his playing, so we asked our friend Chris Trent to set up his equipment at the side of what would be the stage if we had one. Both sets were recorded and Howard was kind enough to let me have a copy.

A week later he phoned to tell  he liked the recording so much he was going to get it released commercially by NoBusiness records who are based in Vilnius, and had released a series of Riley cds, including a 6cd box.

So at last we come to the reason for this post; today a small packet arrived with copies of the cd- Live with Repertoire. I'm delighted that the mixing was done by Alex Hawkins, who is about to do a duo concert for us at Embrace Arts with the great Louis Moholo-Moholo.

If you want a copy of  the cd you can contact me here
Posted by Jazzhouse at 05:21 No comments: