Cornelia Street runs from Bleecker Street to W 4th (close to the junction with 6th Ave) in New York's Greenwich Village. It may be the street where Bob Dylan posed with Suze Rotolo for the cover photo of 'The Freewheelin' Bob Dylan' though some claim it was nearby Jones Street.

In the 1880s Cornelia Street was an African-American enclave; James Weldon Johnson wrote in 'Black Manhattan' (1930) " Scattered through Greenwich Village and 'Little Italy' small groups of Negroes may be found who have never lived in any other part of the city. Negro New York has passed on and left them stranded and isolated. They are vestiges of a generation long gone by."

In 1946 WH Auden took US citizenship and moved into a tiny apartment at no7. Tennessee Williams described it as "fantastically sordid" and igor Stravinsky (for whom Auden was writing the libretto to 'The Rake's Progress') wrote of seeing mice snacking from dirty dishes in the sink. Around the same time the writer (and later New York Times editor) Anatole Broyard used profit from selling on the black market to buy out an Italian junk dealer and open a second-hand book shop at no20. It didn't last long and Broyard went on to write jazz reviews for Partisan Review.

By the '60s Cornelia Street was settled as a backwater of the Italian Village; Joe Cino persuaded the landlady of no31 to rent him the place (because he was Sicilian). Caffe Cino quickly became a centre of Off-Off-Broadway and gay theatre, staging up to 14 shows a week. No-one made any money and Caffe Cino closed in 1968. 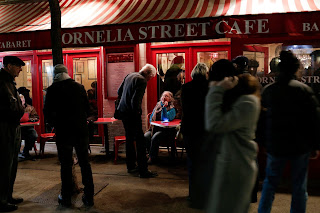 Next door at no 29 "three starving artists" opened the Cornelia Street Cafe in July 1977; the ground floor restaurant with a few tables on the pavement was later enlarged by a narrow basement room; a small bar on the right at the bottom of the stairs and a tiny stage with a baby grand piano at the far end. Two rows of benches, some small round tables and a few chairs completed the furnishing. Senator Eugene McCarthy (the good Senator McCarthy) read his poems there, Suzanne Vega got her first break, the Vagina Monogues were launched.

Our guide explained you could come to the cafe and find something interesting going on in the basement: poetry readings, story-telling, science talks, singer-song-writers, stand-up comedy- and lots of jazz. "It's not a jazz club but it's a great place to hear jazz."

Towards the end of 2018 Ethan Iverson's essential blog 'Do the M@th' mentioned in passing that Cornelia Street Cafe was closing on January 2; Spike Wilner's weekly newsletter from Smalls Jazz Club described the sombre mood he felt while hanging out with musicians on the last night at the cafe. The music went on to 3am.

The reason for the closure is a familiar one in NYC as elsewhere- an unaffordable rent hike. When the Cafe opened rent was $450 a month; when it closed $33,000. Their landord Mark Scharfman features on various 'Worst landlord' lists. Questioned on the telephone Scarfman first denied knowledge of the Cafe; when pressed he replied "No comment" and hung up.

I recall some memorable gigs: Bill McHenry solo, Kris Davis, Sheila Jordan with Cameron Brown, Marty Ehrlich, Barry Altschul; my biggest regret is that I never got to one of David Amram's monthly sessions, where he reminisced about Kerouac and Ginsberg, payed french horn, piano, penny whistle and sang. Amram features in the introduction to John Strausbaugh brilliant 'The Village' (from which most of the history above was taken). He quotes Bob Dylan: " You could sit on a bar stool and look out of the windows to the snowy streets and see heavy people going by, David Amram bundled up." When he heard about the cafe's closure Amram wrote to Robin Hirsch: " I will follow you and we'll do Cornelia Street in exile."

Spike Wilner wondered if the time would come when there was no jazz to be heard in the Village- there's precious little in Harlem- centre of New York jazz in the '20s- despite the great work of Craig Harris, and 52nd St is long gone. That depressing thought spurred me to take a long-overdue step; I subscribed to the Smalls Live archive. Since 2007 the club has made audio and video recordings of all their gigs, and $10 a month gets you access to them all. Do you want to hear the great Roy Hargrove at an after-hours jam?- that's what I'm listening to as I write this. Or Dave Binney, Eric Alexander, Harold Mabern, Scott Hamilton, Steve Nelson? They are all there, and next week there will be more. As long as there's jazz in the Village.
Posted by Jazzhouse at 03:53 No comments: 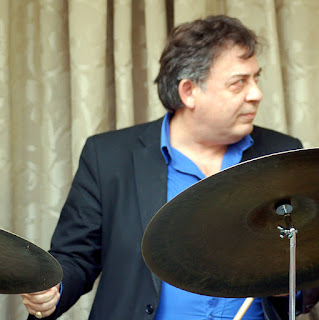 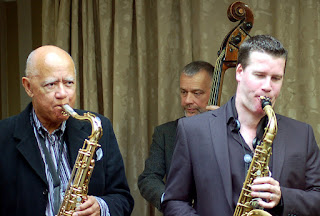 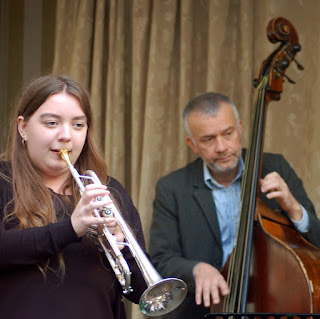