At the Royal Festival Hall in London last Saturday we were warned several times, by posters fixed to the doors, by a disembodied voice over the pa & most genially by John Cumming of Serious during his announcement that we were to turn off our mobiles and refrain from taking photos- fair enough. Similar warnings occur at most concerts, but the slightly pleading tone here carried the subtext: we don't want to upset Keith. At a London concert last year some miscreant had approached the stage to take a snap; his punishment was to be condemned by Jarrett to banishment before the gig could resume.

It was a thoroughly enjoyable concert by a brilliant trio, referred to throughout as 'The Standards Trio', though there was no doubt the pianist was firmly in charge, playing a nicely varied set of standards both familiar and (to me at least) obscure; in particular Jack De Johnette's playing was superb, beautifully shaded and appropriate to the mood of each piece - when Jarrett fell into one of his lengthy vamps De Johnette's drumming ensured tedium never resulted. And when Jarrett left some space Gary Peacock's scampering fills were beautiful.

Jarrett's playing showed his many virtues- a beautifully varied touch that moved from delicacy to barnstorming, a vivid melodic imagination, a formidable technique and a good sense of swing.

My reservations are about the organisation of the concert rather than its content; the first set was 3 pieces in 35 minutes- Jarrett seemed keen to get through the set list and depart, cutting short two of Gary Peacock's solos, the second a few minutes more. After a lengthy standing ovation the trio played the first of 4 encores; the pattern was this: the trio leaves the stage to standing ovation, returns, bows, leaves again. Applause continues, trio returns, plays encore, ovation, leaves, returns, leaves, plays. The encores were nicely chosen, each shorter and quieter than its predecessor. But I became increasingly dissatisfied with the game Jarrett was asking us to play: you want more, but I'll only give it to you if you prove how much you love me. I demand your adulation.

It made me respect him less, and I kept recalling a solo piano gig by Martial Solal I'd heard at 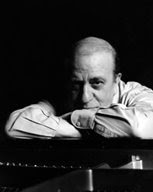 Kings Place in London a few weeks before. The octagenarian had played a piano repertoire much more hackneyed than Jarrett's- I Got Rhythm, Caravan, Satin Doll- a piano bar tinkler's set in fact- transforming them with his unequalled combination of technique (more than a match for Jarrett's) and taste into something very special. His playing was both spontaneous and completely assured- a little phrase from Bebop appeared in one song, reappeared and was developed in the next. Towards the end of the second set he pulled a scrap of paper from his pocket and studied a list of tunes. And when he returned for the first encore joked: I've found a new list.

I would have gladly stayed longer, and regretted the passing of the after-hours club. Solal: a rich couscous, Jarrett: sushi.
Posted by Jazzhouse at 01:48 1 comment: