This post was planned as a diary of a week of jazz in NYC in May; returning to it in September I've decided to delete the majority and concentrate on the most interesting gig of the week. The diary can wait until next time.

Thursday 21: One my my earliest posts mentioned my liking for the music of saxophonist Bill McHenry; since hearing him with pianist Ethan Iverson at Jazz Standard on one of my 1st visits to NYC I've tried to catch him whenever I'm in the city (& helped organise a short UK tour for him a few years ago). I emailed him before flying & found that his quartet- with Duane Eubanks on trumpet- had a gig at the Tea Lounge in Park Slope, Brooklyn (not listed in any of the jazz press.) It was the most interesting and challenging music I heard all week.

They played all new material- Bill told me he'd been working on it for weeks, but I think it was the first time Duane and the the rest of the band has seen the music; it was I guess a rehearsal for his week's gig at the Vanguard. Despite his somewhat approximate readings of some of the heads- not surprising given the serpentine nature of some of Bill's melodies- Duane Eubanks played confidently in a Cherry-like style that suited the music perfectly.

His music is sometimes bleak and unsettling; the intensity of his improvising is remarkable, long-held notes alternating with rapid runs played with a tone that's hard with a crumbly edge, and with rare but effective growls and cries; sometimes he held the tenor straight out in front of him like Rollins, sometimes tucked it into his side like Gonsalves. He addressed the microphone like a matador approaches a bull, leaning forward to attack, then crouched almost to his knees, then moved the mike around on the the stage area as if finding the perfect spot. And all this with no sense of contrivance. Is the music inside or outside?- hard to say on a first hearing- like Ornette he uses written heads that set the mood of the improvisations that follow; when he gets round to recording this new material it will be clearer, but perhaps not relevant- in an interview last year he told Jazz Times“The stuff around me might be a lot different but the way I deal with melody and harmony is not going to be that different, whether it’s on a structure or not on a structure. It’s based around what kind of notes and what kind of ideas I think sound good. And the clearer conception you have of that, then the less effect a structure will have on you.” 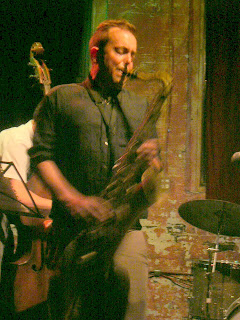 Posted by Jazzhouse at 06:53 No comments: