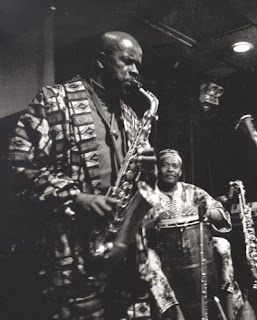 I've been listening to jazz and buying records for more than 45 years, selling jazz records for around 20. I consider myself quite well informed about the music.

So when my good customer Derek Styles wrote to tell me he'd written a bio- discography of Makanda Ken McIntyre I tried to scrape together from what's left of my failing memory what I know about the saxophonist & multi-instrumentalist. Not much surfaced: a Prestige album with Dolphy, some later Steeplechases which I hadn't heard, a Blue Note double cd- ditto. Clearly I needed to read the book, to be reminded of his recordings with Bill Dixon, Cecil Taylor, the Jazz Composers Orchestra, the Liberation Music Orchestra, of his participation in the Studio RivBea Wildflowers sessions.

Peace Thru Jazz is a chronological survey of McIntyre's work and recordings, with reviews, comments by musicians he worked with and short commentaries by Derek. He includes not only published recordings but details of the hundreds of tapes Makanda made at gigs and workshops, a few of which are available via the website maintained by his widow Joy Rosenthal.

What emerges is a rounded portrait of an undoubtedly significant and unjustly neglected musician who made a considerable contribution to jazz from the 60s on as player & composer, and as a pioneering jazz educator.

He was for sure a complicated and contradictory character; he preferred to call his music 'African American' rather than jazz but signed his letters 'peace thru jazz', he could be tough on his students- trombonist Steve Swell recalls him whispering 'You sound sick' in his ear- Swell agreed with his judgment!- yet encouraged a young inexperienced trumpet player to sit in with him at a gig and heaped praise on him afterwards.

He immersed himself in the music education world, teaching in schools and universities, then complained when he was not called on for gigs; he was bitter about the neglect he was shown by record companies & club owners and recalled the Down Beat review of Looking Ahead- 'Don't listen to this record if you have the slightest hint of a headache' - in his sleeve note to the Prestige two-fer reissue (under Dolphy's name). The book is full of praise for Makanda from fellow musicians- Roscoe Mitchell, Charlie Haden, Sonny Rollins, but a sentence from altoist Sonny Simmons stands out: 'Ken McIntyre?- we never liked each other.'

The 700 + tapes of Makanda which have now been placed in the Library of Congress in no way compensate for the paucity of issued recordings- an example: 8 years passed between Cecil's Unit Structures and Makanda's first recording for Steeplechase. His final recording, called with a nice irony 'A New Beginning' was issued on his own label CAAMO in 1999 but got no distribution; he died in 2001 not knowing it was to be reissued by Roscoe Mitchell on his Passing Thru label.

The neglect Makanda received during his career is reminiscent of the treatment of Herbie Nichols, so it's perhaps appropriate that there's a Makanda Project led by his ex-pupil John Kordalewski with the aim of recording some of Makanda's 400 unrecorded compositions.

Derek Styles sells antique silver for a living; this book is a sterling piece of research illuminating the life and work of an important musician. 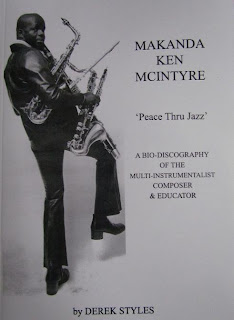 Posted by Jazzhouse at 08:51 No comments: