Tuesday 2nd: Not too tired to catch a set by Spike Wilner's Trio at Smalls. When I've heard Spike previously- either solo or with a Nat Cole- style trio (guitar and bass) he's treated us to an amiable ramble through standards and show tunes. This time with bass and drums he showed an altogether more dynamic side to his playing, still playing standards but less respectfully! A first night set at Smalls has become something of a ritual, replacing a pie at John's of Bleecker Street.

Wednesday June 3. My only previous outing to the Bronx was to visit the New York Botanical Gardens, but the NYC Jazz Record- by far the best guide to the scene as well as containing well-written articles and reviews- mentioned a gig in an Irish Cafe on 238th St- the Joe Farnsworth Quartet with Eric Alexander, Victor Gould and Bob Cranshaw. I'd heard Eric when he'd toured the UK with Dave O'Higgins and had enjoyed the muscularity of his playing, but I was most excited by the presence of the seemingly immortal Cranshaw (present of course on the recent issue of the 6cd set of Rollins and Cherry at the Village Gate in 1962 and so many more classic recordings). Finding the cafe involved climbing a long steep San Francisco-style stairway; when we arrived the tiny music room was jam-packed and Linda Manning broke the news that as we hadn't booked there was no room for us. After pleading that we  had come 3000 miles for the gig we were allowed to stand at the back. When the musicians assembled on the tiny stage it became clear that there were some deps in the band.  But what deps! Harold Mabern was on piano and Jimmy Cobb on drums. To have the opportunity to hear these masters at close quarters is my idea of jazz heaven, especially in a community setting run (like so many UK jazz venues) by an enthusiast. I'd wager we were the only audience members from outside the country, the state, the city, the borough even. Thanks Linda- we'll be back- it's a monthly series which deserves support. 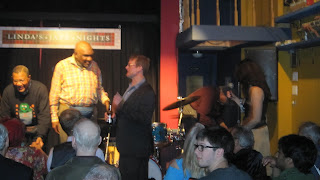 Thursday June 4. The Stone- John Zorn's austere white box at the bottom of Avenue C at 2nd St runs on a curatorial residency basis- ie a chosen musician gets to organise a week of gigs- two bands a night. This was saxophonist Roy Nathanson's week, and this night he started with a duo with pianist Myra Melford, followed by a set by Russ Johnson's 'Still Out to Lunch' band which I'd heard last year at the Dolphyfest in Montclair NJ- Myra Melford (piano) Brad Jones (bass) George Schuller (drums) Russ Johnson (trumpet). Roy played baritone as well as alto in the duo and surprised us with a tender ballad. Myra Melford was  superb throughout the duo set whether playing inside or out. And the band?- I know that  Out to Lunch is regarded by some as a dead end or worse for Dolphy.  I still find those angular tunes endlessly fascinating and the band's interpretations original and dynamic.

Friday June 5. Smalls- After a disappointing set of soul-singer cliches and unnecessarily complicated arrangements of standards by the Swan Bean Quintet- despite some nice trumpet by Josh Evans- we caught a set by Dave Kikoski's Quartet with Seamus Blake, Boris Kozlov and Ari Hoenig, playing Kikoski originals which although complicated were entirely necessary! Kikoski's body language echoes the dynamism of his playing; Hoenig's grimaces do the same for his. Seamus Blake stands tall and blows forceful hard bop and Kozlov - see Monday- grounded the quartet beautifully. A great band.

Saturday June 6 Excellent food upstairs at the Cornelia St Cafe, then downstairs for the Kris Davis Quintet- Kris Davis (piano)  Ralph Alessi (trumpet)  Sylvaine Helary (flute)  Stephan Crump (bass)  Gerald Cleaver (drums). Quiet abstract music very much under Kris' direction; it was impossible to hear the joins between the composed and improvised- there were no music stands on the stage and this was a listening band. I was worried that a flautist might not provide a good foil for Alessi's round-toned trumpet but after a tentative start she asserted herself admirably; Gerald Cleaver could easily have dominated the music but played with a beautifully- judged light touch. An intriguing evening.

Sunday June 7. The Megabus was late getting us back from Philadelphia so our planned trip to Brooklyn to hear Wadada Leo Smith's Golden Quartet was out. An evening without music was unthinkable so we wandered down to the Vanguard to hear Terell Stafford's quintet playing the music of Lee Morgan. Terell had played our club in Leicester in 2009 and had impressed as a warm-toned hard bop trumpet- he came bearing high praise-"One of the great players of our time, a fabulous trumpet player" McCoy Tyner. The set was the great disappointment of the week- Stafford played flashy overblown trumpet, tenorist Tim Warfield had an unpleasant buzzy tone and crude phrasing- at one point I feared he might start bar-walking- and drummer Billy Williams was loud and insensitive. Nice piano from Bruce Barth and bass from Peter Washington compensated to a small degree, but we had no hesitation in refusing the invitation to stay for the second set. My first disappointing gig ever at the Vanguard- it was like being let down by an old friend.

Monday June 8. But the Mingus Big Band at Jazz Standard never disappoints- compositions from all stages of his career played (under the watchful eye of Sue Mingus) with obvious enjoyment, enthusiasm and joy by a protean but always first class group of musicians. It was great to see Jack Walrath again- the sole Mingus alumnus. Philip Harper and Tatum Greenblatt were also on trumpet,the latter playing rock-solid lead  and exciting solos, three excellent trombonists-
Coleman Hughes and two others whose name I didn't catch, Wayne Escoffery and Scott Robinson  on tenor, the wonderful Helen Sung on piano, Boris Kozlov on bass and Adam Cruz on drums. And in the absence of Ronnie Cuber Lauren Sevian played the intro to Moanin' with strength and a rich tone. I'd be happy hearing this band whatever they played but they always surprise-  highlights of their sets this night included a complicated arrangement by Jack Walrath of Goodbye Pork Pie Hat and Cumbia-Jazz fusion complete with rap- Mama's little baby doesn't love shortnin' bread, mama's little baby loves truffles, caviar, integrated schools. Having heard the MBB live a lot we were tempted to give it a miss this time- that would have been an egregious mistake- not even drizzle on the walk back to W 11th dampened our spirits.

Tuesday June 9. The last day in the city, with only a red-eye flight to look forward to  is usually a disappointment. Not this time. We'd agreed to spend some time in Harlem and the NYCJR alerted us to a lunchtime gig at Rendall Memorial Presbyterian Church, 59 West 137th Street, with the Ted Daniel's International Brass and Membrane Corps - on this occasion a quartet with Marvin Sewell on guitar, Michael Bisio on bass and Russell Carter, whose playing on a stripped-down kit was right on the money. Ted Daniel's been a favourite ever since I heard Andrew Cyrille's 'Metamusicians' Stomp'  with David S Ware and Nick di Geronimo, especially the beautiful version of Weill's 'My Ship.' A propos of nothing Tom Lord informs us there are 299 jazz versions of this great song. Playing to a depressingly-small audience Ted Daniel astonished us by playing (on cornet) some King Oliver numbers- Riverside Blues, Mabel's Dream, Zulu's Ball" and Working Man Blues as well as a freeish original,  Airegin and Don Cherry's Art Deco.It's obvious he's always had a regard for the jazz tradition,  but chatting to us afterwards he said he'd only just started to explore Oliver's music. The gig was hosted by Craig Harris and in conversation after the gig my friend Roger mentioned that Craig's cd Souls with the Veil had been on his wants list for a long time but seemed to be unavailable. 'We can make that happen' was the reply, and we were invited for a Harlem stroll back to his brownstone to get some copies. It's a double cd with a stellar band- Steve Coleman, Oliver Lake, Don Byron, Hugh Ragin and more, and Craig pointed out it's currently listed on Amazon for £59.95. Of course I bought some- copies available from JHR for considerably less. It's a richly orchestrated album- almost Ellingtonian in its voicings,  based on WEB DuBois' Soul of Black Folks.
Craig, his wife Diane and Carolyn from Welcome to Harlem made us very welcome- their  Harlem tour is a definite for my next trip.
After a quick turn around the Schomberg Centre  to see the timely exhibition 'Black Lives Matter' it was time to leave for JFK after a truly memorable day. And I managed to bring 120 lps home with me, leaving just 80 behind for another day.

Only in New York dept:
A conversation at the 34th St Post Office: Can I send this Media Mail please? What is it? It's a record. I know it's a record, what is it? Dexter Gordon. Ah Dexter, my man.

Thanks to Roger Gow for corrections, additions and insights and to Bob Steed for the photo.
Posted by Jazzhouse at 04:25 No comments: