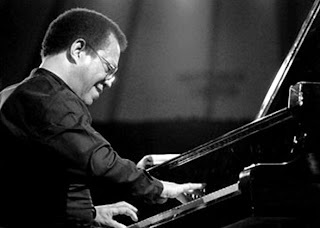 A customer emailed me last night with the news that the great hard bop pianist Cedar Walton had died. You can read an obituary here- the page also provides a link to an hour-long radio programme- Piano Jazz- where he talks to fellow-pianist Bill Charlap and plays solo and duo.

The programme reminded me of another conversation with Cedar that I attended at the Jazz Museum in Harlem on September 11 2008; on that occasion his partner was drummer Kenny Washington who is rather less reverential than Charlap, as you can hear here;  at the bottom of the page are links to a recording of the whole conversation which I enthusiastically recommend; you 'll hear about how he got his nick-name 'Steep', Art Blakey's band-leading style, a very funny anecdote about Blakey's reaction when a flying drumstick which hit his bass-player's instrument after an extravagant gesture by Bu, the story of his first drive through Manhattan trying to find somewhere to park his car, his part in the Giant Steps recording  and much more.

Finding myself in New York without my Walton collection I'd gone to the Jazz Record Centre to find an album for him to sign. All I could find was a 70s CBS lp - Soundscapes- which is hardly his finest hour. When I approached him after the talk with sleeve in hand and asked him to sign he looked up at me quizzically and said: I suppose I could.

Last year I sat with a group of friends at Smoke jazz club at the south end of Harlem to hear Cedar's trio play a set. Maybe Smoke's supper-club ambiance affected him (or perhaps us) but he sounded a tad semi-detached, playing a number of Monk songs as vehicles to blow on rather than digging deep. Now of course I wish I'd stayed for the next set.

Coincidentally a friend, customer (and street photographer - see http://35mil.blogspot.co.uk/)
recently bought a bunch of Eastern Rebellion albums from me then commented:


The two Eastern Rebellion LPs are magnificent too. Who would have thought such tough, machine-tooled mainstream jazz was being played -- and impeccably recorded -- in 1976?
I replied: And he's still doing it! Sadly no more.

Posted by Jazzhouse at 03:49 No comments: