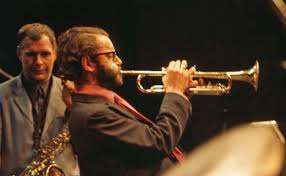 While a student at University College London in 1966, George Foster put on a number of jazz gigs and at one recorded the Rendell Carr Band.  Ian and George remained friends for life and when Ian developed Alzheimer's George had Power of Attorney.  The tape was thought lost but turned up under Ian's bed when George helped move him from his flat to a nursing home.

All proceeds from the cds will be sent by George to Alzheimer’s Research UK. You can order here; we are asking a minimum of £10 for the cd plus postage (UK £1.00) If you choose to pay more the charity will receive 100% of what you send aside from the postage charge. If you choose to pay by card or PayPal please add a little to cover their charges.

On 12th December 1966 1 was in my final year at University College London, studying Latin but my real interest was Jazz: I was Secretary of the Students' Union Jazz Society, which received a small subsidy from the College and put on a professional band every other Monday. Tubby Hayes, Dick Morrissey, Neil Ardley's New Jazz Orchestra, Ronnie Ross, Chris McGregor's Blue Notes had all played in the club room about 25m by 25m next to the Union Bar. The favourite band was the Don Rendell - Ian Carr Quintet, who had so impressed us with their gig at the start of the term that I was constantly being asked to bring them back. I was on friendly terms with the band and happily booked them again to play the final week before the Christmas Holiday.


The band were on exceptional form that night, even though Dave Green had to leave after a few numbers on a prior booking at Ronnie Scott's Club backing Ben Webster. The gig wasn't just a student end-of term-affair either. This room was where the New Jazz Orchestra rehearsed rent-free on Sunday afternoons in return for making the rehearsals open to a student audience. Ian was a regular NIO member, Michael & Don occasional visitors. On the tape, Don mentions Neil Ardley, Mike Gibbs "and many members of the NJO here tonight". One was Tony Reeves, the NJ0's regular bassist, standing in for Dave Green. Michael Garrick was a graduate of the College and was absolutely at home. So it was a relaxed party-like atmosphere with an audience of over 100 squeezed into the room. And I got the band's permission to tape the gig.


I simply tapped into the usual p.a. system. I cannot remember what recorder I used, but looking at web pictures I recognise a Vortexion 3 channel mixer pre-amp and must have taken a feed off that, I also recognise the Reslo ribbon mikes. We had three, one out front for the horns, one near the bass and one behind the upright piano, between the piano and a wall. I was very busy with counting the door takings and enjoying myself and, apart from turning the tape in the interval, simply left the setup alone. I remember listening to the tape with other band members at Michael's house, and we thought the music was great but the sound balance wasn't. The tape then vanished. I was caught up in final exams, trying to get a job after graduation and moving house and forgot about it for over 40 years.


In 2007 Ian Carr, who had been a good friend for over 40 years, had to move into a care home. Alzheimer's had devastated this talented, brilliant man. As I helped box up a lifetime's books and music I came across a box of tapes under his bed. Most were copies of released material, but one was labeled "Rendell-Carr Quintet12/12/66". i asked Ian if I could get it transferred to CD, and took it to my friend Tony Rees for high-resolution transfer. I was staggered to hear my own voice between numbers announcing the qiq. I must have left the tape with Ian for safekeeping in 1967 and here it was, forgotten but safe, and in remarkably good condition.


On 12th December, they were relaxed enjoying themselves, taking risks and pushing their own and each other’s capacities hard. "Hot Rod" is available in several recorded versions, but none are like this. The band achieves an up-tempo wildness, threatening to disintegrate into chaos, pushing the music to the edge of incoherence and deftly pulling it back again. Michael's piano solo is a tour-de-force, dazzling and at the same time hilarious. The under-rated Tony Reeves was an occasional replacement for Dave Green, and fitted perfectly, but was to go down another road with John Mayall's Bluesbreakers and Jon Hiseman's Colosseum.


Great as the studio recordings are, this is the Rendell-Carr Quintet as I remember it: Trevor and Dave grinning as they pushed the music harder while always seeming to have more power in reserve; a mild-looking neatly-suited Don producing amazing walls of sound (listen to his breaks at the end  of "Carolling") Ian swaying with the music and using a plunger mute on "Trane's Mood" like Bubber Miley.,; on the same  number Michael beginning what sounds like a dainty dance and develops into a race for life.


If you never heard this band in the flesh, you are in for a treat or maybe even a shock, for this was a hot band and that Monday Night they burst into flames.